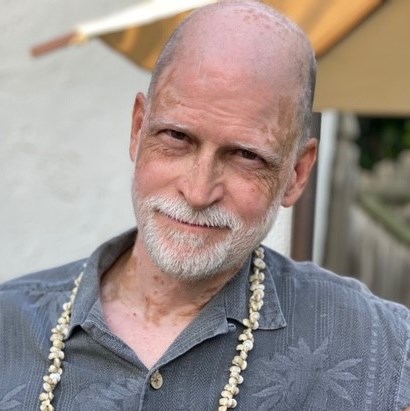 Pete is the epitome of an eternal optimist. That quality has helped him through what for many would have been an emotionally devastating road over the past eight years that saw his wife diagnosed with Stage IV colon cancer only months after he was diagnosed with myelodysplastic syndromes (MDS).

Step back to 2008 when any hint of health concerns first surfaced. Pete was with the U.S. Navy where he first learned to fly. The future commercial airline pilot remembers a brief conversation with the flight surgeon following his annual physical that year in which he was asked, “Did you know you were anemic?” This was the first he had heard of this. So, he began taking iron and thought nothing more of it.

Fast forward to January 2012. During pre-surgical bloodwork for a deviated septum and elective surgery, Pete’s primary care physician expressed concern about low platelets in his blood and suggested he see a hematologist. One week later, a biopsy revealed a diagnosis of MDS. The father of three daughters was put on a monitoring program that included six-month visits to keep an eye on his low platelets and red blood cells. Optimism notwithstanding, Pete took a closer look at his 20 years of Navy medical records and noted a gradually descending platelet line.

“I showed my wife and told her we might be in trouble in several years if this trajectory continues,” Pete said.

Not long after this conversation, Pete’s wife was diagnosed with Stage IV colon cancer. For Pete, his monitoring program was now a clear backburner issue as he focused on his wife and daughters.

For the next three years Pete continued flying, going in for his six-month bloodwork, and caring for his wife and family. Then came a second biopsy in 2015. This time Pete was diagnosed with chronic myelomonocytic leukemia (CMML-1).

“The doctor said it wasn’t actually leukemia, though leukemia was in the name. What he didn’t say was where this was heading,” Pete said.

At this point, a friend and physician told Pete to get himself to one of Philadelphia’s teaching hospitals for treatment; Pete would begin the next chapter of his journey at Thomas Jefferson University Hospital.

“My first six months with my new oncologist continued to be monitoring,” he said. “I had done some research on stem cell transplants being potentially curative for CMML-1 and thought I was golden having a twin brother. Unfortunately, my oncologist explained that a twin is actually ‘too much of a match’ as his blood would have the same deficiencies as mine.”

Pete saw his oncologist every six weeks, and they discussed the possibility of a stem cell transplant in the future. As usual, Pete remained optimistic as he continued to fly and was able to relax himself into the care of his physicians. In late spring of 2015, platelet counts continued to fall and a stem cell transplant with his middle daughter match was scheduled for mid-July.

“It was during a layover of my last trip in June when I went for a run and realized my energy was shot, that I knew the transplant was a must,” Pete said.

That was the beginning of a medical leave from the airline that continues to this day, although Pete hopes to someday return to flying.

Transplant recovery started out well but quickly went downhill, and to make matters worse, Pete was diagnosed at this time with secondary acute myeloid leukemia (sAML). His transplant unit team of six oncologists decided to give him chemotherapy to halt the engraftment and hope for a successful second transplant, which took place in September with his brother as the next available match.

“Up until my first transplant failing, I was good,” he said. “I knew my family was concerned leading up to the transplant, so we had t-shirts made with individual nicknames related to conquering the transplant…anything to create a bit of humor out of a rough situation. Don’t forget, while two of my daughters were grown, my youngest was only eleven at the time, so this was an incredibly difficult time for her as both parents were simultaneously dealing with major health issues.

“Those two weeks immediately following that first transplant failing were for me the worst time in this entire journey. Every morning in the transplant unit, they would write my blood count levels on the board in my room. At first my numbers were climbing. Then they began a downward spiral. And all I could think about was that I needed to ‘stay around’ for my family.”

Unfortunately, other issues ensued following Pete’s second transplant such as graft-versus-host disease (GvHD),1 not uncommon among transplant recipients,2 and severe loss of appetite. High dose steroids helped ease side effects. Most importantly and thankfully, Pete had his wife by his side throughout, and much support behind the scenes about which he would later learn. In fact, even with her own recovery and recuperation, Pete’s wife missed only two days in eleven-and-a-half weeks of hospitalization. In a way, each partner’s cancer prepared the other as caregiver and advocate.

“I also learned that, without question, a nurse is a patient’s best friend,” Pete said. “And I probably had 12-15 great nurses along the way.”

Since then, Pete has dealt with four leukemic tumors and multiple rounds of radiation, which led to lymphedema:3 “I wish I had been made aware of the possibility of lymphedema following radiation to at least prepare myself in some way. It kicked my butt eight months after my second round, so it was a fun surprise to say the least. In fact, I would like to have had a ‘Leukemia for Dummies’ book or video early on in my journey to dig into what to look for, what to expect, and all the possibilities one might experience.”

Though the personal battle continues, Pete and his wife are giving back by participating in such patient support groups as Imerman Angels and Cancer Support Communities.

“I do think having a positive attitude can help you get through things. People tell me ‘You’re so brave the way you fight and cope with every challenge.’ What choice do I have?”

“I do think having a positive attitude can help you get through things. People tell me ‘You’re so brave the way you fight and cope with every challenge.’ What choice do I have?”
-Pete, AML patient
1 National Cancer Institute. NCI dictionary of cancer terms. https://www.cancer.gov/publications/dictionaries/cancer-terms. Accessed September 2, 2022.
2 American Cancer Society. Stem cell or bone marrow transplant side effects. https://www.cancer.org/treatment/treatments-and-side-effects/treatment-types/stem-cell-transplant/transplant-side-effects.html. Updated March 20, 2020. Accessed July 20, 2022.
3 American Cancer Society. What is lymphedema? https://www.cancer.org/treatment/treatments-and-side-effects/physical-side-effects/lymphedema/what-is-lymphedema.html. Updated May 25, 2021. Accessed July 18, 2022.