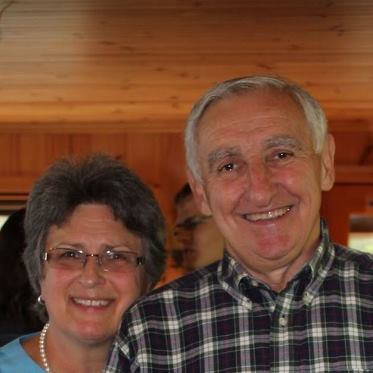 When Ralph went to his primary care physician in Connecticut for a routine physical in late December 2014, he had no worrisome symptoms of any kind. Slight occasional fatigue for an active and athletic 70-year-old was something he told himself was likely “one of the joys of turning 70.” A phone call the next day about his lab results following his routine doctor’s visit would tell a different story.

Based on his blood work, Ralph was advised to go to a local cancer center immediately. Two days after Ralph’s physical, he and his wife of 47 years, Dorcas, found themselves sitting in an oncologist’s office being told news that would rewrite the script for the rest of their lives. The diagnosis was an advanced blood cancer called acute myeloid leukemia (AML). Ralph would begin a series of chemotherapy treatments as soon as possible. And when they asked about prognosis, the doctor suggested they go home and get their affairs in order.

“Oh, and the oncologist recommended getting a second opinion at a specialist facility in New York City,” Ralph said.

Ralph and Dorcas went home and cried, shocked and saddened at what was happening to their family. What they did not realize at the time was that the recommendation to get a second opinion would be a literal lifesaver and the beginning of nearly six years, and counting, of “defeating the odds.”

Less than three weeks after that routine physical, in January of 2015, Ralph and Dorcas visited New York-Presbyterian/Weill Cornell Medical Center and an AML specialist for that second opinion. Following blood and bone marrow extractions and an overall physical, the recommendation unfortunately had not changed – two 30-day chemotherapy cycles beginning the following Monday.

While Ralph and Dorcas prepared for the inevitable, with little hope for a positive outcome, Ralph’s doctor kept digging deeper for options. On Sunday evening, 12 hours before Ralph was due to begin his first chemotherapy infusion at the cancer center in Connecticut, the New York doctor called.

“She asked if I would consider changing my treatment plan. Evidently, she had run additional tests on my labs and explained that I had a leukemia mutation that might respond to a novel treatment added to the chemotherapy currently being offered at trial,” Ralph recalled. “She said it had to be our decision, not hers. We sat quietly at home pondering what would likely be a life or death choice without much clarity – chemotherapy with often harmful side effects and, for someone my age, a probable short lifespan; or take a chance on an unproven drug with no idea of the outcome.”

The next morning, Ralph and Dorcas arrived at Weill Cornell Medicine to begin a clinical trial, with bi-weekly trips to New York for checkups and blood work, and bone marrow testing every six weeks.

For the better part of the next 10 months, Ralph was bedridden at home, with Dorcas as his consummate caregiver and driver every other week to New York. At one point, his myeloblasts (a type of white blood cell that does not mature properly or carry on its normal function)1 rose to more than 70% of his bone marrow volume (a healthy person’s is typically less than or equal to 5%).2

Ralph was extremely sick for many months, sleeping most of every day, barely mobile; he suffered from jaundice, digestive tract and gallbladder issues, skin rashes, and zero appetite which led to a loss of 45 pounds. But through it all, unlike what he had heard from some cancer patients dreading another day’s war, Ralph saw each morning’s wakeup as a pleasant surprise. And perhaps it was this combination of positive attitude, a wife and daughter in battle at his side throughout, and a novel therapy option for his particular leukemia mutation, that gradually would reverse Ralph’s myeloblast numbers.

In October 2015, after 10 months of physical and emotional debilitation that Ralph and Dorcas hope never to repeat, a nice moment happened. They knew Ralph was getting better when he went from nine months of inability to eat at all, to finally enjoying a delicate veal dish prepared by a loving friend at her home. Along the way, there were setbacks, including a diagnosis of C. diff., a bacteria which can cause severe inflammation of the colon and arise due to a weakened immune system, antibiotic use or recent hospitalizations.3 It would take six more months for the digestive tract issues to resolve and for Ralph’s strength to slowly begin to return.

Through it all, Dorcas continues to be Ralph’s physical caregiver, medical researcher and advocate. “When I research AML treatments and trials online, I don’t focus on timetables but possible solutions,” said Dorcas. “My objective is to learn about the disease, the latest research and treatment progress, and any other timely information the AML medical community has to offer. Seeing Ralph lose so much weight was difficult and scary. But when his myeloblast levels began to drop significantly and he seemed to be slowly regaining strength, I wanted him to stay on that pill forever.”

In the summer of 2016, Ralph was asked by his doctor to tell their story at a fundraiser for the cancer center at Weill Cornell Medicine. Since then, Ralph and Dorcas continue to share their experience with presentations and interviews to maybe give hope to others who receive this difficult diagnosis.

“Three legs of the stool keep me alive…the right doctor, the newest treatments, and the right caregiver.”

As biopharmaceutical research continues to make great strides, Ralph’s four years in remission from that first clinical trial therapy was a remarkable success story. “If I had been diagnosed two years earlier, without the drug that researchers had developed for my particular mutation, my prognosis would have been very different to say the least.”

In April 2019, Ralph began a new regimen with a combination of two drugs, including the trial drug with a new one announced in 2018. He remains on this combination and is doing OK. “When we started this second protocol, my oncologist reminded me that second remissions might not last as long as the first,” Ralph explained. “So I feel I am on a fence, one side always grateful for every day, the other sometimes concerned about negative news.”

One more gift from Dorcas. In September 2015, as Ralph was just beginning to turn the corner with his first clinical trial therapy, she threw him a birthday party. But instead of celebrating his real age, it was a first birthday celebration acknowledging Ralph’s new lease on life since his AML chapter began. They have done so every year since, with pie and prosecco.